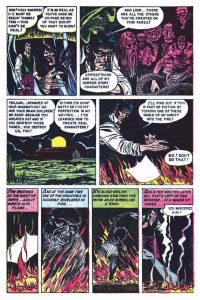 Perhaps it’s because of my childhood obsession with Hammer Horror films, or the fact that my immoral grandmother used to encourage me to read Poe when I was in primary school, but I’ve always had a thing for a particular brand of the gothic – the type that includes ruined castles, thunderstorms, and buxom women in sheer nightgowns. As such, I’ve always had a special place in my heart for pre-code Golden Age horror comics, especially those that straddle the line between sinister and camp. Haunted Horror #23, published by IDW, seems to do exactly that, reprinting forgotten gems from the 1950s. Although some of the stories fail to make much of an impact, at 48 pages long, there’s more than enough here to satisfy anyone who enjoys the campy nature of these tales.

Haunted Horror #23 reprints stories from a myriad of sources, all of which possess deliciously lurid names – ‘Chamber of Chills’ and ‘Secrets of the Supernatural,’ to name but a few. An obvious amount of love and attention has been poured into the book, with each comic printed on thick, matte paper. The comics themselves, untouched from their initial publications, are gloriously coloured – all smoky mauves and sickly yellows – even when the stories are ridiculously over the top. The lettering, however, is often difficult to read, as each page is tumescent with an enormous amount of text. This is fine if you only want to dip in and out of the stories, but reading from cover to cover can be a bit of a headache. 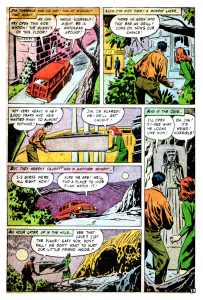 The best comic in the collection is “?”, originally published in 1953. This is a bizarre science fiction story about a botanist who is killed in a plane crash in the South American jungle. A few months later, his wife is led to believe that her husband is still alive – resulting in a story that contains subterranean caverns, flesh-eating monsters, and a disgusting little twist that needs to be seen to be believed.

Another highlight is the aptly titled “Help Us to Die!” Here, an Egyptologist and his wife somehow manage to steal a sarcophagus from the local museum, only to discover that the mummy within holds the secret to eternal life. Though the end of the story is a little predictable, the artwork here is genuinely unsettling, particularly as the couple open the coffin for the first time, as well as the grotesque closing panels. 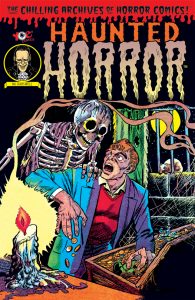 Other stories, such as “Songs from the Spook Box” – four short vignettes based around popular songs – are completely forgettable, but since this is an anthology, readers are free to enjoy certain stories and disregard others. But all in all, Haunted Horror #23 is a fun and campy collection of pre-code comics. Though often ridiculous and over the top, there are a couple of genuinely disturbing moments – ones that may even haunt you long after you’ve finished reading.