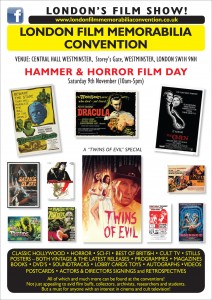 UK’s longest running film fair and convention. Now having it’s 40th and still is on the London and UK film scene.

The Convention presents dealers from all over the UK, Europe, US , Canada and South America. Specialising in rare original film memorabilia and collectables. Taking place six times a year these are truly unique events for anyone with an interest in films! With an enormous range of great and fun collectable items at the show to satisfy any movie buff!

Also on the day, actors and director’s signings, illustrated talks, retrospectives and film screenings taking place through out the day, with prominent figures from the heyday of Hammer and the then new wave of British horror in the 1970’s as well!

With rare an exclusive photo opportunities for fans. Items covering the history of Cinema can be found. From the silents to the present. From rare items of the 1920’s to new releases and the latest heart throb. Among the many different field of cinema covered at the show is – Classic Hollywood, horror films, sci-fi, the best of British and European cinema as we as cult tv!

* SOUNDTRACKS * POSTCARDS * AUTOGRAPHS * VINTAGE & RETRO TOYS * MAGAZINES * LOBBY CARDS * FILM CELLS * PROPS and much, much more can be found at the show!

The “ HAMMER & HORROR FILM DAY “. Is a must attend for horror film fans and those familiar with the British production company Hammer Films, which of course produced some of the most significant British horror films from the 1950’s to the 1970’s.

Specialist merchandise will be in abundance on the day!

An illustrated talks and retrospective program on the day. Tickets are limited and available on the web site www.londonfilmmemorabiliaconvention.co.uk from now!

The program is hosted by Sir Christopher Frayling and the event producer and organiser Thomas Bowington. Includes the following –

• THE ART OF HAMMER HORROR – Captain Kronos : Vampire Hunter. With the actors CAROLINE MUNRO / JHON CARSON and director writer BRIAN CLEMENS remembering the making of one of Hammer’s very best and most unusual films.

• Reflections : NORMAN J.WARREN. The English exploitation pioneer. Discusses censorship, women in horror films and looking back at some of his most controversial films. Inseminoid and Satan’s Slave among others.

• Reflections : DAVID WARNER doing his first illustrated retrospective! From Shakespeare to Star Trek! Remembering some of his best genre films such as The Omen, Amicus From Beyond The Grave and working with directors such as John Carpenter, Wes Craven, James Cameron and Tim Burton.

• TWINS OF EVIL : Special. A screening of the uncut newly restored and remestered version of the film. Presented by it’s director John Hough and cast members Damien Thomas, Mary Collinson and Judy Matheson. Together for the first time since the making of the film!