Guillermo del Toro is sticking with the genre we love the most with his next project Scary Stories to Tell in the Dark. The director posted to Twitter announcing that he would be developing a film adaptation of the book series that feature horrific illustrations by Stephen Gammel. Del Toro has not confirmed that he will be directing the film, so this post is still un-filled, but he will be producing. 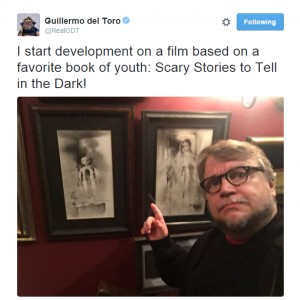 The original imagery in the book series were deemed so horrific that the books were later re-released with tamer artwork by Brett Helquist, and many bookstores banned the books entirely. Del Toro, however, has confirmed that Gammel’s original artwork WILL be preeminent on the film. So, those of you who preferred the freakier and creepier drawings should not be disappointed.

We love to be scared, so can’t wait to see how these chilling children’s tales are brought to the big screen. With del Toro’s keen eye for spectacular visuals, we should be expecting something beautiful, dark and undoubtedly sinister. Keep your eyes peeled for more about Scary Stories to Tell in the Dark.