The Grudge director’s latest Rains down Fear in 4DX

Known primarily for his stone-cold classic Ju-On: The Grudge and its sequel/remakes etc, director Takashi Shimizu is currently putting the finishing touches to his latest horror offering, Ame Onna or, A Rain Woman.

The film follows Rika (Nana Seino), who’s depression is taking its toll not just on her, but her relationship with her boyfriend, Ryū (Shuntarō Yanagi). Every night she has the same dream, about a little girl waiting on a train platform in the rain. The girl sees a woman on the tracks, soaking wet and protecting a young boy. Suddenly a train hits her. When Rika’s mother dies, she decides to go back to the town where she was raised, and things get weird… 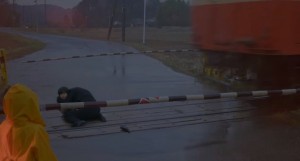 Themes of rain and water in general are common in Japanese horror stories, and by the looks of this brief trailer, A Rain Woman plays liberally on this collective cultural fear. As the trailer also makes clear, Shimizu is planning to release A Rain Woman in 4DX, giving audiences an experience in which they will feel the wind and rain on their skin, as well as the rumble of the train. There will also be various aromas to match the images onscreen. Indeed, the director reportedly designed the whole film specifically to make use of the 4DX format.

A Rain Woman is due to be released in Japan in early summer. Which just happens to be the country’s rainy season.