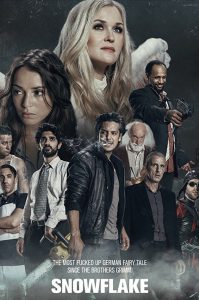 One of many intriguing genre films heading to the upcoming EFM is Adolfo Kolmerer and William James’s nightmarish meta fairytale Snowflake, which Toronto-based genre specialists Raven Banner will be launching worldwide sales rights for.

Boasting a pretty out there premise, the film is set in Berlin in the near-future, and concerns a bunch of gang members hunting down the person who murdered their families. Along the way, they find themselves trapped within a fucked up fairytale within a screenplay penned by a deranged dentist, and must contend with Assassins, maniacs and a blood-spattered angel.