Gremlins 3 Will not be a Remake 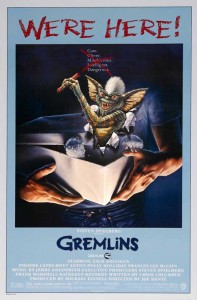 Here’s some good news for those who hate remakes and reboots: the planned addition to the Gremlins franchise will not be a remake or a reboot. The loosely termed ‘Gremlins 3’ is to be a continuation of the story and will be set around 30 years after the original film’s events.

There is no confirmed plot of the film yet or news as to whether any previous cast members will be returning. However, during a Gremlins screening at the Prince Charles Cinema in London, Zach Gilligan said, “[…] The only thing they will be – and apparently are going to be – doing is something along the lines of like Jurassic World, where it will be 30 years later. I don’t know if I’m in it or not, but I think there is probably a decent chance since I’m one of the few people left standing from the first movie.”

Following in the footsteps of Jurassic World is a great idea; the film grossed a phenomenal amount of money at the box office and proved that audiences will rush to see film sequels set years after the original. Gremlins was nowhere near as successful as Jurassic Park, obviously, but it is now considered a cult classic with a large dedicated fan base. Bringing Zach Gilligan in to the mix would only heighten audience excitement and intrigue in the film, so somebody make that happen.

For Gremlins 3 to be great it needs two things: Gizmo and a heap of practical effects, if it could be easy on the CGI that would be fabulous.