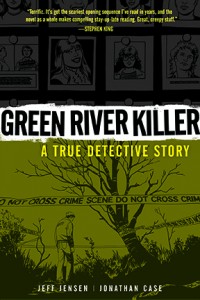 Monsters disrupt our dreams, leave us sweating in our sleep, tossing and turning. We wake with remnants of those nightmares lingering in our psyche. And as the day passes the visions that plagued our time of rest fade into the backdrop of everyday life. That’s what monsters do. Movie monsters.

The real monsters of the world, the ones that walk, talk, eat, sleep and breathe, they’re a different breed. And the terror they instill inside of us doesn’t simply wane as the hours tick by. We think about them constantly. We fear them on an entirely different level. And we know, those monsters look just like the rest of us. They could be our next door neighbour. They could be our postman, or our mechanic.

They could be Gary Ridgway.

For the unaware, Ridgway was – after decades – finally identified as the feared Green River Killer, a prolific serial murderer who eventually claimed to have taken more than 70 lives. His victims were generally prostitutes and runaways, and in accordance with Ridgway’s modus operandi, were strangled from behind. Ridgway’s weapon of choice was initially his own two hands, but after sustaining injuries during his attacks, Ridgway made adjustments in his approach, utilising ligatures in order to avoid any visible damage and subsequent suspicions from those close to him.

He was calculated. He was cautious. He chose victims that were less likely to be missed by society. And for years it worked, until the Green River Task Force – a group of detectives specifically appointed the task of hunting down and apprehending the serial killer – eventually pieced enough evidence together to turn the heat up on the nondescript Ridgway, and one unsuspecting monster’s house of cards came tumbling down.

Leave it to Dark Horse Comics to delve into such a heinous story in order to bring genre fans a graphic novel that not only chills to the bone, it captivates. Readers are afforded a look at not just the life of Ridgway, but the many men and women who worked for and alongside the Green River Task Force. We see the chinks in the mental armour of those who spent decades pursuing a violent threat to society. And we get a look at the reward that comes when removing an imminent threat from society.

And we get all this from the amazing duo of writer Jeff Jensen (who also wrote Tomorrowland) and artist Jonathan Case (who did some amazing work on The Creep), who not only nail the facts and look of just about every documented player in this jaw dropping scenario, but also create a tangible connection for the fascinated fan, now able to better understand the factual steps of a long gruelling case and the lifelong effects it can have on those directly involved.

The Green River Killer: A True Detective Story was made available in paperback in October. While the graphic novel has been readily accessible in other formats for a few years now, the paperback is an absolute must, and the re-release of a legendary title such as this deserves a bit of extra insight from one of the masterminds who helped expose one of history’s most unsettling stories to the casual comic reader. Matt Molgaard had a chat with award winning author Jess Jensen to discover more this book, and the origin of this riveting tale.

SCREAM: Where did the idea to write a graphic novel about one of America’s most prolific serial killers originate?

JJ: The graphic novel tells the story of my father, Tom Jensen, who worked on the Green River Killer case from 1984 to its conclusion in 2003. By 1990, he was the only police detective working full-time on the case. So the story of the Green River Killer hit close to home, quite literally. Still, I didn’t think to tell this story until 2003, when the case ended in a rather unusual and dramatic fashion. If you’re not familiar with it, a brief recap. Gary Leon Ridgway — who was a suspect during the earliest years of the investigation — was arrested in 2001 for several of the murders attributed to the Green River Killer. DNA evidence linked him to the crimes. It was generally assumed Ridgway killed all the women and girls that were victims of the Green River Killer (at least 48 victims total). In 2003, Ridgway’s lawyers approached prosecutors, in secret, with a plea deal offer: Ridgway would confess to killing all the victims — and lead them to many more bodies police never found — in exchange for life in prison. This plea deal was accepted, on the condition that Ridgway could prove to detectives he actually committed all these crimes and lead them to undiscovered remains. In June of 2013, Ridgway was quietly moved from jail to the offices of the Green River Task Force. He lived there, in secret, in a small office just down the aisle from my father’s cubicle, guarded by a team of four SWAT police officers, for 188 days. Every day, my father led a group of detectives in an effort to get Ridgway to prove his claims. Despite his willingness to confess and his desire for a plea deal, Ridgway was weirdly reluctant to share all of his secrets. When my father told me all about this in the fall of 2013, my imagination was captured. My dad had chased this monster for almost 20 years — and now this monster was living in his work space. Moreover, he was actually WORKING with this monster to solve the monster’s crimes. Incredible. I had to tell this story. So why a graphic novel? I’ll answer that in your next question…

SCREAM: Tell me about the kind of time and work that went into researching the Green River Killer case.

JJ: I originally conceived this as an article for GQ Magazine. I pitched it, they accepted the pitch, and I began researching. I interviewed my father and many of his colleagues. I also interviewed Ridgway’s lawyers. I read transcripts of the detectives’ interviews with Ridgway and had access to my father’s notes and files. I also read several books about the case. In the end, though, I couldn’t crack the assignment. My vision was too big for the number of words I was given, and I couldn’t nail the right tone. I wanted the piece to be true crime story and a personal reflection on my dad. I just didn’t know how to pull that off. So the piece was scrapped. I very quickly began to consider different ways to tell my dad’s story and make use of all my research. I’ve loved comics since I was a kid (my dad used to read me Batman and Justice League comics) and I remain a huge believer in the medium. I’ve written comics, too, and I immediately saw how to present my dad’s story in comics narrative form. I didn’t get around to pitching the project until the end of 2007. I took it to Dark Horse, they said yes. They introduced me to an artist, Jonathan Case, and we were off and running. The book took a total of 3 years to write and draw. It was published in August of 2011 in hardback. The same week as the birth of my third child!

SCREAM: Did you find yourself at all disturbed by the capabilities of man while writing Green River Killer, or was this a case of ‘business as usual’? 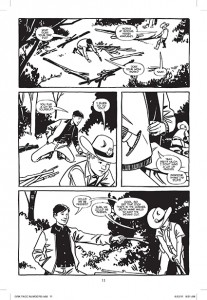 JJ: I am tremendously disturbed by everything that Ridgway represents. His misogyny, his rapacious drive to consume and destroy women, his calculated strategies of hunting and killing his victims. I am also troubled by the fact that we live in a society that made it very easy for him to do what he did for as long as he did without being detected. What fascinated me — and terrified me — the most was how he had so easily developed an internal life — marked by rationalisations, denials, delusions, selective memory — that allowed him to live with himself, to such a degree that he could eventually have — by all accounts — a loving, healthy relationship with his third wife. Ridgway not only shows us man’s capacity for evil — but our capacity to be comfortable with evil.

SCREAM: When you’re working on a project like this, which is centred on such a touchy and impacting subject, does it get to you at all, not just as a writer, but as a human being in general?

JJ: For sure. It’s disgusting and infuriating. I didn’t enjoy reflecting on his crimes, didn’t enjoy the work of trying to empathise with him. It’s toxic stuff. Fortunately, I had a narrative focus — my father’s journey — that got me through the darkness and also gave me permission to be selective in my sampling of Ridgway’s horror. The book doesn’t wallow in Ridgway’s horror. It gives you what is necessary, and no more.

SCREAM: Releasing a fact based graphic novel of this nature isn’t really the norm, do you feel as though this book will help to educate, or spawn genuine curiosity from a crowd that may not be too familiar with Gary Leon Ridgway and his horrific story?

JJ: I have little interest in educating people about Ridgway and even less interest in making people curious about him. My hope is that this book captures your imagination for the kind of everyday heroism that’s required to bring people like Ridgway to justice and cultivates deeper understanding and empathy for people who have suffered from Ridgway’s evil: the victims, the families of victims, the detectives, the city of Seattle. 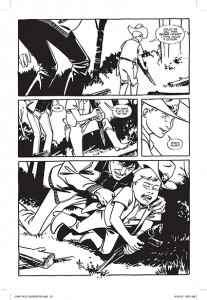 SCREAM: How different was it crafting a true story versus a work of fiction, and will we see you dip into the non-fiction pool again in the future?

JJ: With non-fiction, I feel a tremendous responsibility to representing history and people with accuracy. It’s a pressure that is daunting but also necessary and ultimately thrilling and rewarding because it forces me to dig deeper and empathiase more. In the process, writing becomes an opportunity to grow as a human being. Fiction can do that too. I just experience it more so with non-fiction. I hope to write more non-fiction in the future. There are a number of real-life people and periods of history that I would love to explore in narrative form.

SCREAM: Thanks for talking to SCREAM, Jeff. And, all the best for the future.

JJ: Thanks, Matt. My pleasure.