Upcoming shark attack horror film Great White has released a rather cool poster that suggests this one is worth holding your breath for. 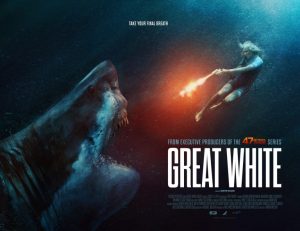 Inspired by real events, the film marks the feature directorial debut of Martin Wilson and follows Kaz and Charlie, two seaplane operators and lovers who, along with their passengers, fly to the idyllic Hell’s Reef. The trip soon takes a deadly turn, however, when they find themselves abandoned far from shore with something toothy circling below. What follows is a desperate bid for survival as the group attempt to make it to land before nature’s most lethal predators deprive them of their limbs.

Katrina Bowden (Tucker and Dale vs. Evil) stars in the film alongside Aaron Jakubenko (Tidelands), Te Kohe Tuhaka (The Dead Lands), Tim Kano, and Kimie Tsukakoshi. Michael Boughen wrote the script for Great White, which releases in theatres and on VOD on July 16th.