IN THE GRAVEYARD ANTEMORTEM: Book Review

In the Graveyard Antemortem is a terrific novel, though it should be noted that the story leans more towards readers of young adult fiction as opposed to seasoned horror aficionados. That being said, anyone who is still in touch with their inner teenager will enjoy trying to unravel this mystery along with the protagonist, whose adolescence is so brilliantly captured that we feel like we’re walking in her shoes throughout. Furthermore, the story is told entirely from the first person perspective of its main character, which further reaffirms its ability to transpose the reader into her mind. 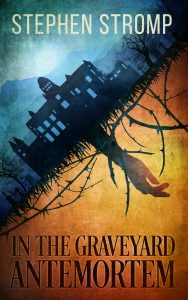 Rest assured though, horror fans: In the Graveyard Antemortem will still send a shiver down your spine and get under your skin occasionally, especially when read in the dead of night when it’s stormy outside. The creepy elements are there in abundance, but the story is driven by an exuberant sense of adventure that harkens back to the halcyon days of 80’s horror. As someone who grew up obsessed with Stephen King, Neil Gaiman, Twin Peaks and countless horror, suspense and adventure movies, this really tapped into my taste buds and left me hungry for more. That being said, it’s more than a mere nostalgia trip; good storytelling is good storytelling, and the fact that Stromp is able to evoke strong emotion and memories is a testament to his writing ability and strong characters.

Overall, In the Graveyard Antemortem is an engaging creepy mystery that’s packed with emotion and heart. It might make you feel young again and rekindle that feeling you had as you were immersed in the spooky mysteries that initially shaped your tastes in the first place. It’s a fun novel too, with just the right amount of darkness to give it some emotional heft. I look forward to seeing whatever Stromp releases next.