Iglu Media Ltd. and BillyGoat Entertainment Ltd. are delighted to announce the release of ‘Grabbers the Game’, an iOS/Android game to coincide with the UK DVD release of the feature film, Grabbers.

The game is available now, for free, from the Android store – https://play.google.com/store/apps/details?id=tv.billygoat.grabbers and the Apple store – https://itunes.apple.com/gb/app/grabbers/id571613539

‘Grabbers the Game’, which was developed with funding from Northern Ireland Screen, is a 3D, first person survival game in which players fend off “Grabbers” (the eponymous, bloodsucking creatures of the film),  while besieged in the pub from the film.

Gareth Gray, Creative Director of Iglu, said, “We’re delighted to be given the opportunity to work with Grabbers’ IP and bring it to an entirely new platform. We feel strongly that the future of the media industry is developing content with a cross-platform focus to maximise the potential value of IP and this project is indicative of that.” 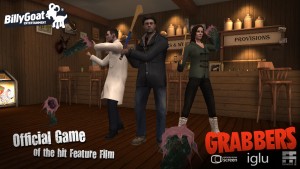 William Barr, Director of BillyGoat Entertainment, said, “We’re thrilled to be working with the guys at Iglu Media on an IP that we’re sure will go onto assume its rightful place as a cult classic. If BillyGoat by way of creating an amusing mobile video game pitting players against hordes of tentacle clad creatures baying for their blood, can contribute to the success of the Grabbers brand we would be pleased as punch.”

Grabbers is directed by Jon Wright from a screenplay by Kevin Lehane and was produced by Tracy Brimm, Kate Myers, Martin Niland and Piers Tempest.

You can check out the game trailer on YouTube (youtube.com/iglumediauk)

You can also follow the progress of the game development by following the team on twitter @iglumedia or on the Grabbers the Game blog http://www.grabbersgame.com.

If you would like to know more about the game you can contact Jonny Kane at Iglu directly by email: jonny@iglumedia.co.uk