Promotional material for Toho’s upcoming Godzilla: Resurgence has thus far held back on showing us any real action from the film. That changes today, albeit in very brief fashion, with the arrival of this TV spot.

The promo comes following last week’s release of the film’s synopsis, which gave us our first clues as to what the King of Monsters will be getting up to when he returns to Japanese shores in July. FYI, it’s business as usual, by the sounds of things.

An unknown accident occurs in Tokyo Bay’s Aqua Line, which causes an emergency cabinet to assemble. All of the sudden, a giant creature immediately appears, destroying town after town with its landing reaching the capital. This mysterious giant monster is named ‘Godzilla’. 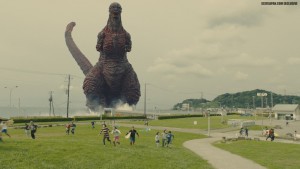 Godzilla: Resurgence – the 29th entry in the franchise and Toho’s first in over a decade – will crash Japanese screens on July 29th. It is co-directed by Hideaki Anno (Evangelion series) and Shinji Higuchi (Attack on Titan).