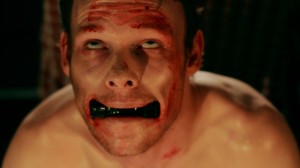 Director Andy Stewart said, “I am absolutely thrilled to bits that my little film will be screening for horror fans in my hometown at all but to be given the opportunity for it to play alongside American Mary for the second time is just amazing. I’m looking forward to seeing how it goes down and to catching up with Jen and Sylvia”.

Since its completion, Dysmorphia has received many positive reviews and has already been described as “Quite possibly the greatest short film we have ever seen.” by Jen & Sylvia themselves.

Dysmorphia received its World Premiere at Grimmfest 2012 in Manchester, again, screening before American Mary before screening at the inaugural Rio Grind Film Festival in Vancouver, where the graphic imagery actually caused one viewer to faint. The film also went on to scoopthe award for “Best Practical Effects” in Vancouver.

The first in a trilogy of “body horror” short films, Dysmorphia was shot over two days in May 2012, on a budget of £160.

Andy Stewart is the editor of popular horror blog AndyErupts.com and also writes for SCREAM, the UK’s Number One Horror Entertainment Magazine. He is currently in pre-production on his second body horror short film, Banquet.