If you’re a big fan of the Alien franchise, you probably know the story of cyberpunk icon William Gibson’s Alien 3 script, which was never produced and bore almost no resemblance to the sequel we actually got. That script has previously been turned into a comic by Dark Horse, but you’ll soon be able to read it in novel form too courtesy of Titan Books! 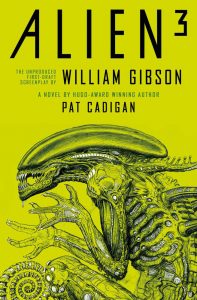 Alien 3: The Unproduced Screenplay is currently available for pre-order and will release on August 31st. Keep reading for the official synopsis…

“The Sulaco—on its return journey from LV-426—enters a sector controlled by the ‘Union of Progressive Peoples,’ a nation-state engaged in an ongoing cold war and arms race. U.P.P. personnel board the Sulaco and find hypersleep tubes with Ripley, Newt, and an injured Hicks. A Facehugger attacks the lead commando, and the others narrowly escape, taking what remains of Bishop with them.

“The Sulaco continues to Anchorpoint, a space station and military installation the size of a small moon, where it falls under control of the military’s Weapons Division. Boarding the Sulaco, a team of Colonial Marines and scientists is assaulted by a pair of Xenomorph drones. In the fight, Ripley’s cryotube is badly damaged. It’s taken aboard Anchorpoint, where Ripley is kept comatose. Newt and an injured Corporal Hicks are awakened, and Newt is sent to Gateway Station on the way to Earth. The U.P.P. sends Bishop to Anchorpoint, where Hicks begins to hear rumours of experimentation—the cloning and genetic modification of Xenomorphs.

“The kind of experimentation that could yield a monstrous hybrid, and perhaps even a Queen.”