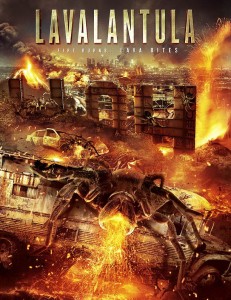 If you thought the Syfy channel was running out of fantastic creature features, then you were wrong. This new teaser for Lavalantula proves that there are plenty more where Sharknado and Ice Spiders come from. Planning to be shown during Syfy’s ‘Sharknado Week’ this Saturday, Lavalantula comes from the director of Big Ass Spider! and it seems as though he’s sticking to what he does best; big ass spiders. It looks like it’s going to be a hell of a lot of fun, so count me in.

The synopsis is short, sweet and simple:
A volcano erupts in Los Angeles, spewing out lava-breathing tarantulas.

Seems like a legitimate, nightmarish possibility. Check out the poster below, too. It shows a wonderful, fiery destruction.

Catch Lavalantula when it is shown on 25th July on the Syfy channel.