Get Ready to Run With the Trailer for The Pack

If you’re afraid of dogs then you might want to give this trailer a miss. However, if you’d love to see a helpless family pit against a pack of wolves, then you’ve come to the right place. The Australian horror-thriller The Pack centres on a family trapped when a pack of wolves descend on their home. Cue something intensely claustrophobic and bubbling with suspense. 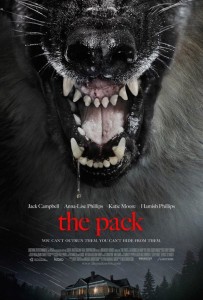 Packed with gory violence and thrills, The Pack looks like it’s going to be a solid entry in the ever-growing genre that sees homes invaded by vicious creatures. The Breed gave us a similar concept with a group of teenagers, but there’s nothing like seeing a young family fighting to survive. Burning Bright was a nice surprise, and although it suffered from pacing issues, it was highly entertaining and had a handful of effective jump-scares.

Synopsis:
Man’s best friend becomes his worst nightmare when a horde of bloodthirsty wild dogs descends upon a family’s farmhouse in a fang-bearing fight for survival.

The Pack comes from first-time director Nicholas Mastandrea who’s finally stepped away from assistant directing (The People Under the Stairs, Scream franchise, Cursed) with a script from Robert Conte and Peter Wortmann. Check out the trailer below and be sure to catch The Pack when it is released on 5th February in the USA.