Get Read to Party with Lost After Dark 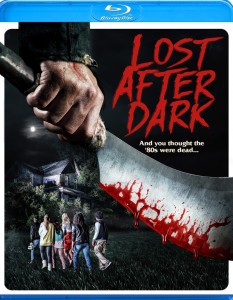 The ’80s are back with a vengeance in this slasher homage Lost After Dark from Anchor Bay. From it’s retro and Carpenter-esque soundtrack to its ’80s hairdos, Lost After Dark looks like the perfect throwback to the slasher flicks that dominated the 1980s.

Recent sleeper hits like It Follows have proved that now is the time for directors to write their love letters to the era of horror classics; giving the genre a much-needed refresh, but also taking us back to the time where Freddys and Jasons ruled the roost. I am very excited for Lost After Dark; we all love a good killer horror and this one looks like it has enough fun, thrills and frights to keep us entertained to the end. Check out the trailer below, with the blood-soaked blu-ray cover to accompany it.

Synopsis:
Spring Ball, 1984. Adrienne (Kendra Timmins, Midnight Sun, “Wingin’ It”), a straight-A student, joins her quarterback crush Sean (Justin Kelly, Maps To The Stars, Big Muddy) and some friends in sneaking out of their high school dance for some unsupervised mayhem. The teens’ party plans hit a snag when they run out of gas on a deserted road. They head out on foot and discover a rundown farmhouse where they hope to find help. Instead they find themselves at the mercy of Junior Joad (Mark Wiebe, Sweet Karma), a cannibal killer from an urban legend. After the brutal murder of one of their friends, the group’s quest for help becomes one of survival. Will anyone survive the night?

Lost After Dark will be released from Anchor Bay films on 1st September 2015.