Get Infected with this Viral Trailer

Directing duo Ariel Schulman and Henry Joost (Paranormal Activity 3 & 4, Catfish) are preparing to unleash their latest, sci-fi horror Viral. This trailer has been put out ahead of an upcoming home media release of the film, which was scripted by Terra Nova writer Barbara Marshall from a story by Christopher Landon. Landon wrote Paranormal Activitys 2-4, as well as the fifth entry, The Marked Ones, which he also directed. 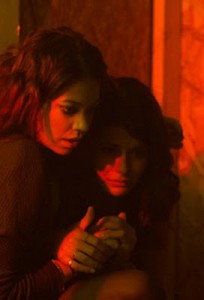 Here is the official synopsis:
Struggling after a recent family tragedy, teenager Emma Drakeford begins a video documentary about her life for a school project. Her life is turned upside down as a terrifying virus sweeps through her small town, turning her friends and neighbors into vicious monsters. Quarantined with her family, Emma believes they are out of harm’s way but when the contagion finally infiltrates their home Emma and her family are faced with an impossible decision – if someone you love becomes a threat, do you kill them in cold blood or save them at the risk of your own life? From the executive producer of ‘Cloverfield’ comes a terrifying new twist on the monster movie that is the first in a trilogy.

Viral hits Digital HD on July 29th courtesy of Starz Digital. An On Demand release follows on August 2nd, along with a DVD from Anchor Bay, Radius-TWC and Dimension Films.