Get a Glimpse of Pitchfork in New Still

Over the weekend, Uncork’d Entertainment acquired the rights to Pitchfork, the debut feature of Emmy-nominated choreographer Glenn Douglas Packard, with a view to releasing it early next year. To celebrate, they’ve put out this still of the film’s titular killer.

Described in the press release as a “highly anticipated horror spectacle,” Pitchfork is directed by Packard from a script by himself and Darryl F. Gariglio, who also executive produces. 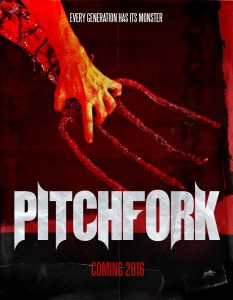 “Glenn [Douglas Packard] has created a monster for the ages,” says Uncork’d Entertainment president Keith Leopard. “The film is nothing short of chilling, and I’m very excited to be teaming up with Glenn and the team to bring it to audiences across the globe.”

Keep an eye out for Pitchfork in the new year.