Get In! Get Out Receives a Home Release Date 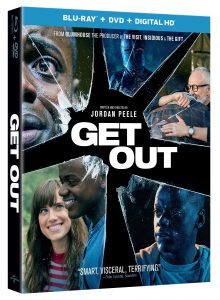 One of the best films of the year, Get Out, has secured a home release date for this May, which means it can be ours to own in a little over a month. I, for one, can’t wait to get my hands on the film, because it’s one of the scariest and most intelligent horror films of the decade. If you’re a fan of skin-pricking horror that is filled with surprises, wit and terror, then Get Out is a must-watch.

Synopsis:
Now that Chris (Daniel Kaluuya), a young African-American man, and his girlfriend, Rose (Allison Williams) a young white woman, have been dating for several months, she invites him for a weekend getaway upstate at her family’s upstate home with parents Missy (Catherine Keener) and Dean (Bradley Whitford). At first, Chris reads the family’s overly accommodating behaviour as nervous attempts to deal with their daughter’s interracial relationship, but as the weekend progresses, a series of increasingly disturbing discoveries lead him to a truth that he could have never imagined.

The DVD and Blu-ray release of the film will hit on 23rd May, but you can get your hands on the Digital HD copy of the film from 9th May. If you wait that little while longer for the physical copy then you’ll be able to enjoy the special features that include an alternate ending with commentary by Jordan Peele, deleted scenes, behind-the-scenes, a Q&A discussion with Peele and the cast, as well as an overall feature commentary.

Be sure to grab Get Out when it comes home and check out our review of the film here.