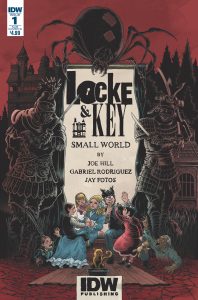 Muschietti sure does love the King family’s tales, doesn’t he?

From Stephen King’s son, Joe King, Locke & Key follows three siblings who move back to their family home to discover that a set of keys give them a series of magical powers. Alas, a demon is intent on putting an end to their fun because it is after the keys, too.

It sounds right up Muschietti’s street and certainly sounds like the kind of story the son of Stephen King would write.

In the series, Scott will play the role of Bode, the 8-year old youngest sibling of the three. Their mother will be played by Frances O’Connor (AI: Artifical Intelligence, Mercy, The Conjuring 2).

Be sure to keep an eye out for Locke and Key which comes from a script written by Joe King, executive produced by Muschietti, Barbara Muschietti and Lindsey Springer.