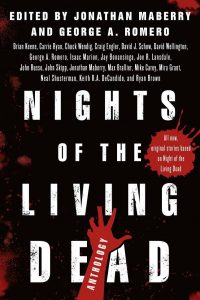 While the chances of seeing George A. Romero putting zombies back on the screen again seem ever more remote, the legendary filmmaker is returning to where it all began, this time in book form. A plethora of well-recognised authors have penned short stories set during the 48-hour period when the zombie outbreak began in Romero’s 1968 game-changer, Night of the Living Dead, for an anthology that Romero himself has edited.

Nights of the Living Dead will be available from July 11th, from St. Martin’s Griffin.