George Romero Brings Zombies To TV With Empire Of The Dead 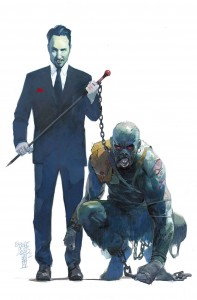 The master of undead, flesh-starved corpses George Romero will be returning to our screens, as his latest endeavour has been given the opportunity for an adaptation. Romero’s latest zombie exploit comes in the form of comic book series Empire of the Dead, and it’s set for a TV series in some form.

The comic is a 15 issue series, so it will have to be discussed whether the adaptation will be a mini series or if it’ll get picked up by someone big enough to transform it into a full-length series. Although it doesn’t currently have any channel attached to it, Demarest, who funded Kevin Smith’s horror film Tusk, is founding it.

The story in the comic focuses on a zombie outbreak in Manhattan that leaves the entire island isolated after being quarantined. If being trapped on an island full of ravenous dead bodies wasn’t the worst situation ever, then it gets even worse as eventually blood-thirsty vampires come into play. There will certainly be a shortage of blood and brains.

We’ll update you once more details are released.