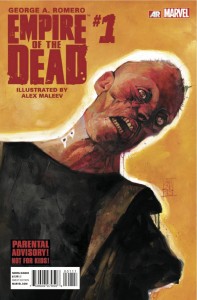 It was recently announced that zombie legend George A. Romero’s comic book series Empire of the Dead would get the adaptation treatment and become a television series.

Romero will be co-writing the TV show adaptation and at a recent interview during the St. Louis Wizard World Comic Con, he discussed how he’d quite like to get behind the camera himself:

“Well, I think I’ll hopefully be directing a couple of them [Empire of the Dead episodes]… We don’t have a production deal yet, but our fingers are crossed and it looks good… But I hope to direct a couple, and I’m writing the pilot, and probably at least most of the first season if it flies.”

He also spoke about how he wrote the Marvel limited comic book series, and how he could focus more on an abundance of zombies and some other creatures:

Synopsis:
The story in the comic focuses on a zombie outbreak in Manhattan that leaves the entire island isolated after being quarantined. If being trapped on an island full of ravenous dead bodies wasn’t the worst situation ever, then it gets even worse as eventually blood-thirsty vampires come into play. There will certainly be a shortage of blood and brains.

To read the rest of George A. Romero’s interview, you can go here: