Gene Simmons and Wesley Snipes Team up for Temple 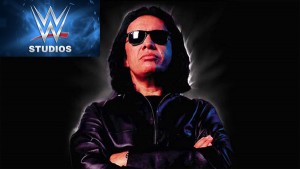 Filming begins this week on Temple, a horror thriller from Erebus Pictures, the genre label formed by KISS legend Gene Simmons and WWE Studios. The film stars Blade himself, Wesley Snipes, as well as Anne Heche (I Know what You Did Last Summer), Dave Annable (TV’s 666 Park Avenue) and WWE star Seth Rollins.

Snipes, who also produces along with Simmons and WWE Studios president Michael Luisi, told Deadline: “It’s exciting to find myself in a genre I have always wanted to explore. We are looking forward to a great brand collaboration with Erebus, WWE and Gene.”

Scripted by Matt Savelloni, “Temple follows a team of trained operatives who find themselves trapped inside an isolated military compound after its artificial intelligence is suddenly shut down. There, they begin to experience strange and horrific phenomena.”

Temple is to be directed by John Stockwell, who directed 2006’s Paradise Lost (AKA Turistas) and is currently finishing up Kickboxer: Vengeance, a remake of the 1989 Van Damme favourite.