Gemma Arterton, Paddy Considine and zombies in first stills for The Girl with All the Gifts 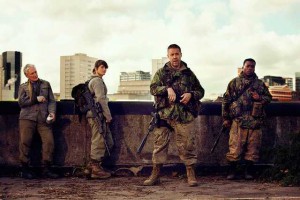 Headed to UK cinemas on September 9th is The Girl with All the Gifts, a British dystopian horror drama (with zombies) that has been kept relatively quiet until these stills surfaced. The film is directed by Colm McCarthy, an experienced TV director with episodes of Spooks, Ripper Street and Peaky Blinders under his belt, as well as one previous horror feature, 2010’s Outcast.

The Girl with All the Gifts has a quite exceptional lead cast consisting of Gemma Arterton, Glenn Close and Paddy Considine. They are supported by Dominique Tipper (Vampire Academy), Anamaria Marinca (4 Months, 3 Weeks and 2 Days), Fisayo Akinade (E4’s Cucumber/Banana) and one-to-watch Daniel Eghan, who is currently shooting both Marvel’s Doctor Strange and Rogue One: A Star Wars Story.

The story concerns a scientist and a teacher living in a dystopian future who embark on a journey of survival with a special young girl named Melanie. It is based upon M.R. Carey’s 2014 novel of the same name, in which a mutated fungus has infected most of the human race, turning them into braindead flesh-eaters known as ‘hungries’. More news on the film as we get it, but for now enjoy these nice-looking images.