Keep your hand at the level of your eyes, because French production company Gaumont is in the early stages of creating a six-part miniseries adaptation of Gaston Leroux’s 1910 novel The Phantom of the Opera (Le Fantôme de l’Opéra)! 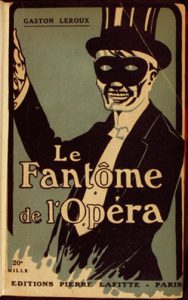 The Phantom of the Opera centres around a young soprano, Christine Daaé, who draws the obsession of the brilliant but disfigured composer living beneath the opera house. While most people associate the tale with Andrew Lloyd Webber’s mega-popular musical of the same name, the Leroux novel is actually a pretty creepy little work of Gothic horror fiction, though it certainly has elements of mystery and romance.

Written by Anthony Horowitz, this adaptation will reportedly be based on the book, not the musical. Previous adaptations of the novel include Universal’s 1925 classic, which featured Lon Chaney in the title role, and Dwight H. Little’s ridiculously gory Robert Englund-starring version from 1989.