Heading to this year’s AFM is intriguing British horror Possum, which sounds to be a cocktail of all manner of classic horror elements.

What makes this one so intriguing? Well, aside from the strange, mysterious synopsis (see below), it is directed by Matthew Holness, otherwise known as Garth Marenghi. Holness played the author, actor and dreamweaver in cult 2004 horror spoof series Garth Marenghi’s Darkplace, which he created. Since Darkplace, Holness has written spinoff talk show Man to Man with Dean Learner (starring Darkplace’s Richard Ayoade), as well as acting in sitcoms Free Agents, Life’s Too Short and Ricky Gervais/Stephen Merchant comedy drama Cemetery Junction. Possum will mark his first feature as director.

The story is about a disgraced children’s puppeteer who returns to his childhood home and is forced to confront his wicked stepfather and the secrets that have tortured him his entire life. 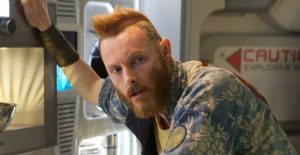 Holness sells his film incredibly well, saying: “Possum is a supernatural horror combining the stark psycho-drama of George Romero’s ‘Martin’ with the uncanny terror of ‘Dead Of Night’. The film draws on the dark nightmares of silent expressionist horror, British classics such as ‘The Innocents’ and ‘Don’t Look Now’, as well as the claustrophobic suburban gothic of Pete Walker’s ‘Frightmare’. Possum will terrify in the best tradition of classic horror cinema, evoking an atmosphere of supernatural dread and creeping horror.”

A promising description, but hear it in Marenghi’s huffy monotone and it would be foolish not to at least consider the possibility that Holness is setting us up for a far more serious affair than he plans to deliver.