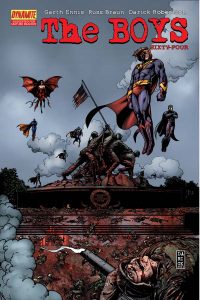 Whether a new comic inductee or an old timey fan, the name Garth Ennis has surely popped up in that “you wanna read something REALLY messed up?” way. From sex-obsessed zombies in Crossed to questioning everything you ever knew about God in Preacher, Ennis was never one to shy away from controversy. When The Boys debuted in 2006, he took his eye for pure f’ing insanity and turned it to the superhero genre, exploring the darker sides of being the most powerful beings on the planet and the secret group responsible for keeping them in check. With its monumental success, it took only five years after the comics end to be green-lit for a series and it seems like the stars are coming out to snatch up parts on the hotly debated work.

In latest actor acquisition, Israeli actor Tomer Capon (When Heroes Fly) has been signed to play the role of Frenchie, The Boys factions’ notorious wild card. As the name implies, Frenchie is indeed French and is famous for swinging between bouts of calm serenity and pure Armageddon. In a comic that’s famous for murdering off superheroes in the most gruesome way possible, he’s the cherry on an already ultra-gore sundae. Capone joins an already long list of actors which include Karl Urban, Elizabeth Shue, Laz Alonso, Karen Fukahara, among others. 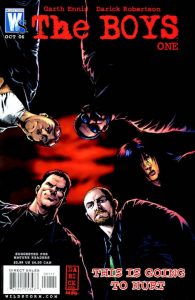 Filming begins late 2018 and will debut in 2019 and is handled by Sony Pictures in partnership with Amazon Studios and Original Films. Taking the director’s chair will be none other than Garth Ennis fanboys Seth Rogan and Evan Goldberg. With the success of their no-holds-barred Preacher adaption, fans can rest easy knowing that these two are keeping a watchful eye over The Boys TV series. Of course, that does make one wonder how much of the darker details will the duo be able to address. The Boys was famous (or infamous) for its unabashed display of violence, gore, and sex including raw, emotional energy and, every once in a while, completely ludicrous and jaw-dropping superhero antics. Herogasm, anyone? Yeah, it’s exactly what you think it is. That doesn’t include the addressing of highly sensitive topics such as homophobia, sexual assault, child trafficking, celebrity worship, etc. This is definitely a series that needs to be handled with tongs.

Keep an eye on Amazon for more info and keep watching the stars!