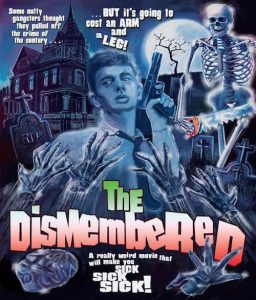 Of all the boutique genre labels putting out loving restorations of horror classics and obscure gems, Garagehouse are fast establishing themselves as one of the more unique, focusing as they do on films though lost forever. Having rediscovered and released 1984 action comedy Ninja Busters and 1968’s The Satanist, the label are on the brink of releasing another lost film, 1962 B-horror The Dismembered.

Shot in Philadelphia in 1962 by director Ralph S. Hirshorn, the film was thought lost for some 50 years, and was transferred & digitally mastered in 4K from the director’s only 16mm film print. Garagehouse describe the film as “…an offbeat ghosts-and-gangsters satire that plays like a cross between Roger Corman and Casper the Friendly Ghost, and evokes the spirit of American International Pictures and the drive-in B movie.  Featuring homicidal ghosts, creeping severed limbs, cobwebbed sets, graveyard atmosphere and weird musical improvisations by the Main Street Ghouls, The Dismembered is one strange little movie with lots of ghoulish charm.” 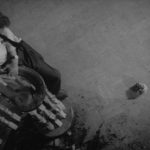 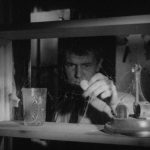 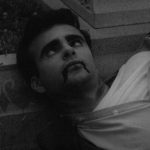 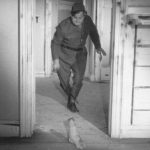 Garagehouse’s Blu-ray will include a commentary with Hirshorn and A Chronicle of Corpses director Andrew Repasky McElhinney and Hirshorn’s 11-minute 1959 short The End of Summer, plus liner notes by Dan Buskirk and new artwork by Stephen Romano. It will hit shelves on April 25th. In the meantime, here are some stills from the film, plus Garagehouse’s newly-cut trailer.