The Game is Afoot in Dead Body Trailer

It’s a deliciously slash-happy setup: a group of friends play murder mystery game Dead Body in an isolated lakehouse but unbeknownst to them, an all-too-real killer has joined in. Now available on digital platforms is Terror Films’ Dead Body, which now has a poster and trailer for your perusal.

The film comes from first-time director Bobbin Ramsey and writers Ian Bell and Ramon Isao, and has enjoyed a festival run which saw it win ‘Best Special Effects’ at the 2015 New York City Horror Film Festival, and pick up a nomination for ‘Best Horror Feature’ at the 2016 Phoenix International Horror and Sci-Fi Film Festival. 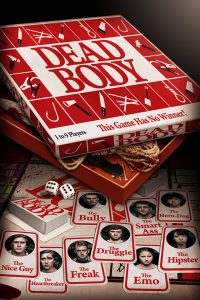 Several friends decide to celebrate their high school graduation at a lake house in the woods. One of the classmates recommends that they play the old-fashioned game of ‘Dead Body.’ In the game, one player is “the body,” one player is “the killer” and all of the other players try to figure out whodunit. Unfortunately, on this particular night, the game ends up featuring a real-life killer!

The bodies begin piling up and, in an “Agatha Christie And Then There Were None” style mystery, the survivors are forced to figure out who the killer is amongst them – before there is no one left standing.