Future Not Bright for The Strangers Sequel 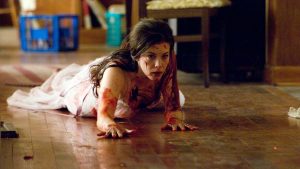 It’s been eight years since director Bryan Bertino freaked us out with creepy home invasion flick The Strangers, and a sequel has been planned, promised and rumoured for most of them. Earlier this year it looked as though things were moving with Marcel Langenegger (Deception) attached to direct from a script penned by Ben Ketai (this year’s The Forest). We even had the following synopsis:

After financial troubles force them to move out of their house, a family of four try to make it through the night in a deserted trailer park while being hunted by the savage, ax-wielding, mask-wearing trio wrecking havoc once again.

Unfortunately however, financial woes are not confined to the fictional world, and Relativity Media’s well-documented struggles to keep afloat may have put an end to the project for good. Speaking to Rue Morgue recently, Bertino’s regular producer Adrienne Biddle (Mockingbird, The Monster) revealed that she and Bertino are no longer involved with the film, lamenting the likely death of the project.

“Bryan and I and our company are not attached to the project at this point”, Biddle explained. “He wrote the original script, which I will say is a fantastic piece of writing, but he was never going to direct it, and it’s in Relativity Media’s hands following the sale of Rogue to Relativity. With all the troubles they’ve had, I don’t know if it’s going to happen. If they can get their financial act together, maybe, but it has almost happened two or three or four times over the last five or six years, so I’ll believe it when it see it.”

The 2008 original was a genuinely chilling piece of work, and while fingers will no doubt still be crossed for the sequel, it might be time to let this one go.