FUNKO REVEALS GET OUT AND US POP! VINYL COLLECTIONS

Jordan Peele’s horror catalogue is coming to POP! vinyl. Funko recently revealed the designs for two toys based on Get Out and seven based on Us. 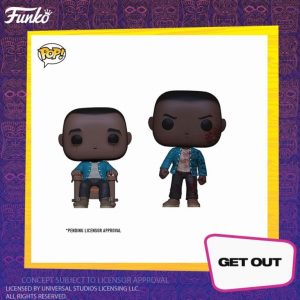 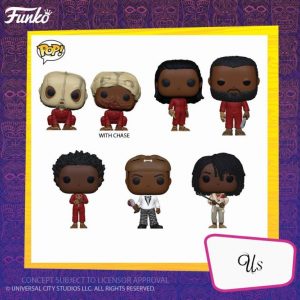 After showing off early concept art for the Get Out dolls at Comic-Con last month, Funko released an official preview of the designs online. Both figures are of Chris Washington, with the standard doll portraying the iconic image of Chris strapped to the chair. A bloody variant will be available exclusively on Funko Web.

The Us collection, meanwhile, includes figures depicting Adelaide holding the fire poker, Red and Umbrae holding scissors, and Abraham holding a bat. There are also two Pluto dolls, one wearing a mask and one exposing his scarred face. A doll of Jason wearing his monster mask on top of his head will be available exclusively at the Funko Shop.

Both collections will be available soon.