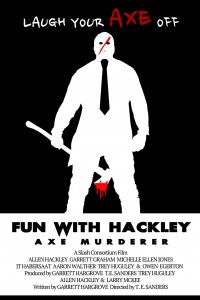 Hackley is a washed-up serial killer of the stalk-and-slash breed, who’s lost the taste for the job. And it really is just that; a job. Employed by a corporation specialising in hiring masked killers, Hackley (think Jason Voorhees-with-cornrows) starts thinking about looking into alternative employment opportunities in Fun with Hackley: Axe Murderer, a comedy that looks to sit somewhere between Cabin in the Woods and Man Bites Dog.

The film is directed by Tim Sanders, who shot on a reported budget of just $150,000. We’ve got some stills and the film’s first trailer, which promises something pretty unique. Fun with Hackley has a scheduled US release of January 1st, 2017.

Synopsis:
Life-long serial killer Hackley is going through a midlife crisis and rethinking his life and career while dealing with his meddling, incompetent boss.

Since 1980, Hackley has personified fear. This prolific masked serial killer has axed his way through hundreds during his reign of terror. He doesn’t kill because he’s crazy… 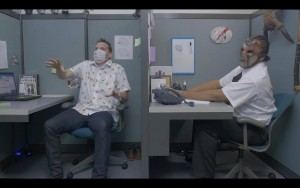 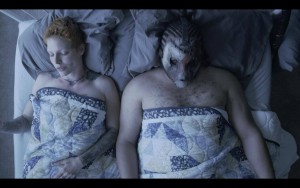 Hackley is one of the many masked killers employed at Revelation Killing Solutions, the third most profitable corporation in the growing industry. Hackley is the longest tenured team member in the “Slashers” division but has lost the enthusiasm he once had for the job.

Fun with Hackley is a comedy feature film that chronicles the adventures of Hackley as he stumbles at the office and rethinks his life, love, and career. Hackley struggles with an incompetent manager, rival serial killers and antiquated rules as he tries to regain his love of killing.