Full Trailer for Scouts Guide to the Zombie Apocalypse 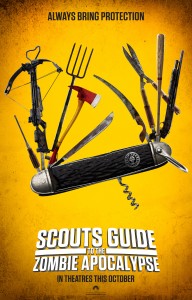 If you like your horror with a side of comedy, then this one’s for you. A trio of scouts and a stripper – sorry, cocktail waitress – team up to take on a zombie hoard in the trailer for Scouts Guide to the Zombie Apocalypse.

There have been quite a few zom-coms over the last few years: Shaun of the Dead starting it all and soon being  followed by the likes of Zombieland, Warm Bodies, Life After Beth and plenty more. The next addition comes from Paramount  and it seems to throw in a few things we don’t see very often, including zombie cats and zombie boobs.

Putting aside some of the immature humour, this definitely looks like it’s going to be a lot of fun. There’s a great use of slow-motion and it certainly isn’t holding back on the bloody gore. Take a look at the trailer below and decide whether you’ll be joining the scouts as they kick zombie ass.

Scouts Guide to the Apocalypse will arrive in American cinemas on 30th October and in the UK on 27th November.