The first episodic series from Charles Band’s company Full Moon, 2014’s Trophy Heads will soon be making the jump from Full Moon Streaming to Amazon Video, where it will be available to stream from March 17th. 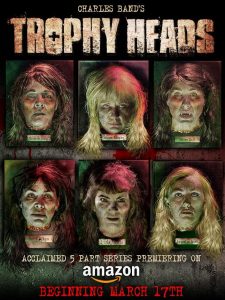 A paranoid mama’s boy (Adam Noble Roberts) whiles away his days and nights enjoying himself (in every sense) to classic horror movies and the comely leading ladies who are menaced within them. Feeling that these famous ladies aren’t getting the treatment they deserve, he devises an unholy plan – with the approval of his equally demented mom (Maria Olsen) – to pay the ultimate tribute to his aging heroines. These six sultry scream queens are set in the psycho’s sight and one by one he begins to “collect” them, transporting them to a makeshift prison he’s set up in his basement. And one by one, in every episode, each one of these lovely ladies meets their end at his hand, with their still pretty heads winding up as trophies on his wall. 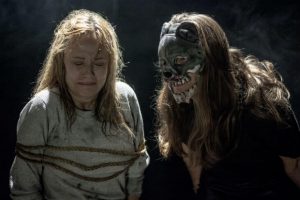