While his casting initially seemed unlikely, Disney Channel alum Ross Lynch has received glowing praise for his portrayal of a teenage Jeffrey Dahmer in Marc Meyers’s biopic-of-sorts My Friend Dahmer. If you didn’t manage to catch the acclaimed film during its festival run last year never fear, as it lands on Blu-ray and DVD in the US tomorrow, March 5th.

The film was based upon the graphic novel by John ‘Derf’ Backderf, which tells of the author’s high school friendship with the future serial killer. 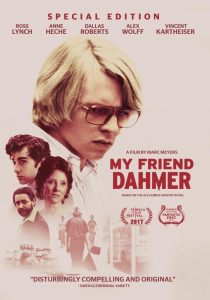 Synopsis:
Jeff Dahmer is an awkward teenager struggling to make it through high school with a family life in ruins. He collects roadkill, fixates on a neighborhood jogger, and copes with his unstable mother and well-intentioned father. He begins to act out at school, and his goofball antics win over a group of band-nerds who form The Dahmer Fan Club, headed by Derf Backderf. But this camaraderie can’t mask his growing depravity. Approaching graduation, Jeff spirals further out of control, inching ever closer to madness.

Appearing opposite Lynch are Mad Men’s Vincent Kartheiser, Anne Heche (I Know What You Did Last Summer, 1998’s Psycho), Dallas Roberts (The Walking Dead, 3:10 to Yuma) and Jumanji: Welcome to the Jungle’s Alex Wolff.