Synopsis:
Barry is a drug-addled, abusive bastard who—after yet another bender—is abducted by aliens. Barry takes a backseat as an alien visitor assumes control of his body and takes it for a joyride through Cape Town. What follows is an onslaught of drugs, sex, and violence as our alien tourist enters the weird and wonderful world of humankind. 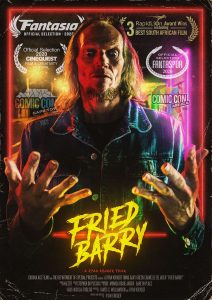 There are some movies that you experience rather than watch. Fried Barry is one of those movies.

Written and directed by Ryan Kruger, making his feature debut, the film opens on the titular Barry (Gary Green) walking out on his wife and child and shooting heroin. Soon after, he is abducted by aliens in one of the film’s more surreal and nightmarish sequences. His body is returned to earth, but it quickly becomes clear that he’s not himself anymore. Someone else is in the driver’s seat, and they’re ready to experience everything the city has to offer.

This change is communicated predominantly through the off-kilter physicality of Green’s performance—from the stiff, shuffling way he starts to walk to the strange, snapping movements he makes with his jaw. Green is exceptionally watchable every second he’s on screen, bringing both humour and naivety to the role.

While the film is joyously crude, it’s also oddly endearing to watch this alien hitchhiker taking its first confused steps on our dangerous yet exhilarating world. This jarring introduction to earth is further underscored by Haezer’s intense score and Stephen Du Plessis’s often frenetic editing. Combined with the gritty and at times dizzying cinematography by Gareth Place, it’s easy to understand what the hitchhiker is feeling, even though few words are said. 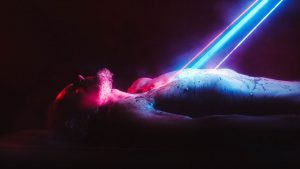 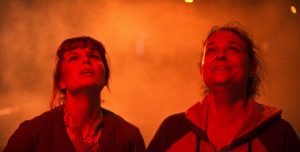 After an insane first act, the film does struggle to maintain it’s momentum as it lurches toward the midway point, becoming little more than a series of increasingly unlikely scenarios that Barry stumbles into. It’s still interesting to see what will happen to him next and which bizarre and vulgar characters he’ll meet along the way, but it does leave one questioning whether this concept might have worked better as a short. In fact, Fried Barry did start life as an experimental short of the same name (which is on YouTube and highly worth a watch, by the way), and while the feature film does take what’s there and amp it up to eleven, a leaner runtime might have kept the concept fresher for longer.

Still, Fried Barry is one hell of a trip, and one that needs to be seen to be believed. With an unmissable lead performance and an unexpectedly emotional core, there’s more to it than meets the eye, though it’s greasy enough to warrant a shower afterwards.