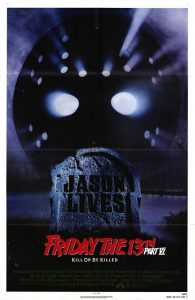 I think it is fair to say that I’m having somewhat of a mixed reaction to these movies. Part 5, for example, is easily one of the worst movies I have ever watched – and I have seen Dawn of Justice.

So it was with a lot of trepidation that I started to watch this one. The opening scene didn’t fill me with confidence. It begins with teenage Tommy from the previous movie driving frantically with a friend through the night. He is convinced he has to make sure Jason is dead… Just like to stupid dream sequence last time.

This time, though, this time it was different. Oh boy was it different.

If you’ve seen it then you’ll know what I mean, but the scene where Jason ‘comes back’ and the method of his revival is the stuff of genius and really sets out the stall for the rest of the movie.

It’s like the film makers have finally accepted what they are making is very silly indeed and have decided to really go for it. And it works. 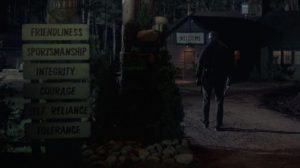 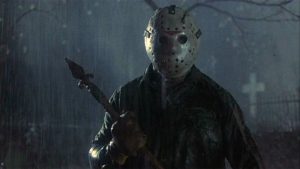 You have some clever lampshading going on – ten years before Scream did it (“I’ve seen enough horror movies to know any weirdo wearing a mask is never friendly.”). For a movie about a relentless killer from beyond the grave, this has a tremendous sense of fun.

The plot is the usual one – a group of children (one of whom is reading No Exit by Jean Paul Sartre) arrive at Crystal Lake again, while Jason is picking everyone off one by one.  And there are so many fun highlights as he goes about his business. The group of corporate paintballers where a particular favourite of mine. 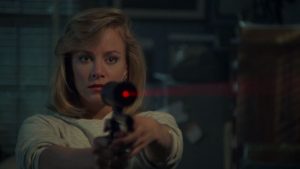 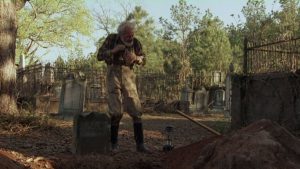 This is easily my favourite so far, and like the original movie, this is a genuinely good movie that lifts it above being a ‘mere’ slasher pic.