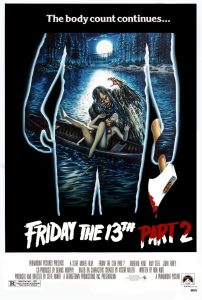 And so I continue my quest to watch all of the Friday the 13th movies for the first time.

I watched this back-to-back with the first movie, so because of that, the first five minutes or so of this were a bit redundant, in that they are a quick reprise of the original movie.

That was something that struck me as strange. But on further thinking, was this perhaps because this movie was, in a way, breaking new ground? Yeah, there were horror sequels before but nothing like this, at least not for a couple of generations. By that I mean a horror sequel that begins shortly after the previous movie ended.Stop shouting Halloween 2 at me – I’m allowing some wriggle room because both sequels were released in the same year.

As I said, this picks up where the original left off. We catch up with Alice, the final girl from the first movie as she is, understandably, still having nightmares about the events at Camp Crystal lake. Don’t worry though, because her trauma and fears are swiftly cured forever.

We jump forward a few years. But not to Camp Crystal Lake, however. Oh no, they wouldn’t be that stupid, would they?

Of course not, instead this is set in an entirely new summer camp… a few minutes walking distance from Crystal Lake… d’oh!

The set-up is similar to the first movie, with a group of young people setting up the summer camp in preparation for the influx of visitors. 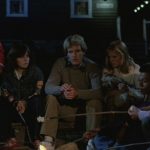 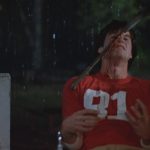 They are the usual motley bunch of unlikeable teenagers, with a few interesting exceptions. There is an interesting scene early on when a group of the teens are discussing the legend of Crystal Lake, of Jason Voorhees and his, um, over protective mother. In the middle of the usual scoffing and laughing, there is one of the girls who dares to express an opinion that perhaps what happened was not entirely the fault of Jason and his mother, but partly the fault of how they were treated horribly by everyone else.

That is not to say that this is a sincere meditation on the nature of Good and Evil. That scene is as deep as it gets.

What we do have is a nice line in black humour that pleased me greatly. There’s a wonderful moment where a cute little doggie with a bow tie comes face to face with Jason in the woods – then we cut to a shot of sausages cooking on a barbecue.

Apart for these touches, this movie very much follows the tired and trusted formula from the first movie. You having sex? You’re dead mate – even if you’re disabled. Say what you want about Jason, he is the true face of equality. He will kill anyone.

And kill people he does in a series of bloody and imaginative ways. Although he is rather fond of his machete.

Worth mentioning, too, is the final girl in this movie. Yes, she does her fair share of running and screaming. She also manages to use her brains at one point to outwit Jason is a brave and audacious way. 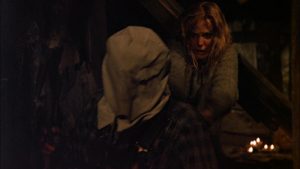 All in all, this is a solid sequel that, while staying close to its formula, has enough beats that lift it above your standard fare. But really, the most important thing about this movie is that it introduces to the world a bona fide horror icon in the unstoppable killing machine that is Jason Voorhees.