Dexter Morgan is back next month in Dexter: New Blood, and Showtime has shared a wintery new poster that’s sure to give you chills! 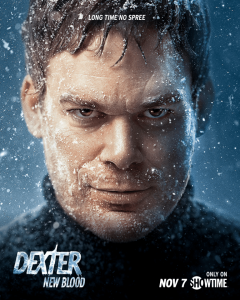 Set 10 years after Dexter went missing in the eye of Hurricane Laura, the new season will see him living under an assumed name in the fictional small town of Iron Lake, New York. Dexter may be embracing his new life, but in the wake of unexpected events in this close-knit community, his Dark Passenger inevitably beckons.

Michael C. Hall is back as the titular character, with Jennifer Carpenter and John Lithgow returning to play Debra Morgan and Arthur Mitchell, aka the Trinity Killer, respectively. The reprisal also adds Clancy Brown (The Mortuary Collection) to the cast as the season’s primary antagonist, along with Jamie Chung (Lovecraft Country) as Molly Park, a true crime podcaster.

Clyde Phillips is taking over the showrunning reigns once more for Dexter: New Blood, which is set to premiere on November 7th. This will be the first time that Dexter has been on our screens since 2013.