Synopsis:
Things turn sour when two gangs meet in an abandoned warehouse and it becomes every man – and woman – for themselves. 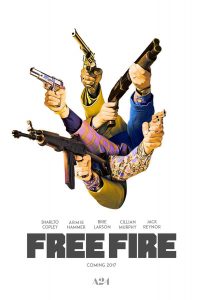 Free Fire is an absolute riot. This is Ben Wheatley’s Reservoir Dogs as he scales down the extravagance and glamour of High-Rise for a more claustrophobic and contained endeavour, but one that packs an almighty punch to the gut.

If you’ve ever wanted to see a lot of famous faces in a very tight space and armed to the teeth, then you’ve come to the right place. Free Fire is an experiment into minimal film-making and it is extremely close to being a full-blown success. However, the flimsy storyline cannot be forgotten, even if the script is filled to the brim with witty one-liners and gags galore. You can’t ignore the lack of narrative, because there’s an impressive amount of action, violence and relentless shooting. You can’t substitute a story for mindless entertainment, no matter how fun it is. Free Fire doesn’t quite get the balance right between unadulterated excitement and depth, choosing to rely solely on impressive action sequences to gain acclaim. Wheatley does his best Tarantino impression and has a blast – and so will the audience – but that’s really all it is; an enjoyable masquerade with very little below the surface.

This is all very obvious and I believe that Ben Wheatley had very few intentions here other than to have a good time. The jokes come quick and steady; Sharlto Copley and Armie Hammer are gut-wrenchingly hilarious and it becomes tiring to keep up with the hilarity. The entire film is a non-stop explosion of guns, humour and more guns and if that’s all you want, you’re going to fall in love with Free Fire. It’s full-speed ahead and no stopping at any stations; this is 90 minutes of pure spectacle and, honestly, it’s mighty impressive that it is able to hold your attention when there is very, very little going on. Guns are pointed, aimed and fired, people get hit, they crawl around on the floor in pain, they bleed, they die. The end. How on earth does this last an hour and a half? Well, did The Revenant not rely on one man crawling around on the ground for about 3 hours and win a ton of Oscars?  Free Fire has more people, more crawling and it’s half the runtime. Need I say more? 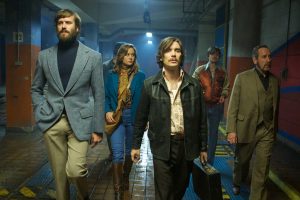 The brilliant cast and the perfect script that is littered with f-bombs and jokes, timed to perfection are what truly sells Free Fire. From Brie Larson to Babou Ceesay and Patrick Bergin to Sam Riley, the cast are a real ensemble. Not one actor is favoured for another and they all get an equal amount of screen time, allowing the audience to get on-board with their personalities and their motivations before they start firing bullets at one another. It’s a brutal and fantastic game of cat and mouse where everyone is a cat and everyone is a mouse. You don’t know whose side any one is on or what they’re really fighting over, because it doesn’t matter. Who are the good guys? Who cares?

Aside from the obvious madness and the joy in watching people shoot each other to death, there is quite possibly a comment on America’s gun culture in here. The ease at which each character picks up a gun and shoots someone is fun, yes, but is that not troubling when you really think about it? Coming from Britain, Ben Wheatley has been able to sit back and watch the news where, honestly, it feels as if someone is shot and killed in the USA every minute. There are countless debates about gun laws and the ways to solve the ever-rising counts of gun crime in the States and some people argue there needs to be more guns. Give the teachers guns, so when a crazed gunman runs into a school the teachers are armed. Problem solved. If everyone in the club had a gun there obviously wouldn’t have been as many casualties when that one guy decided to open fire. More guns is safer. More guns is the answer. Ben Wheatley would argue otherwise; Free Fire shows the outcome of what happens when every one has a gun and it ain’t pretty. 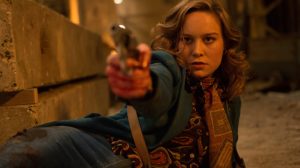 That’s it. It is absolutely impossible not to be drawn in by the simplicity of it all, because it is just so bloody brilliant at doing very little. This gives you what the trailer boasts. You get what you order. You’re either going to love it or hate it, there’s nothing else to it.