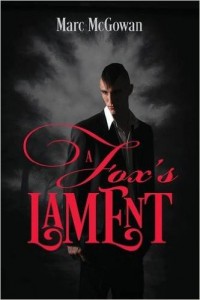 Marc McGowan is not a name I am familiar with in the world of horror. Just the sort of books I like getting to review! Fresh talent is always welcome amongst the older, more familiar names we like to read on a regular basis.

In A Fox’s Lament, we meet Jon. He is dead, but has spent many years in limbo, unable to make it into Heaven because of unfinished business. He is given a chance to go back to Earth to reap revenge on those who killed him.

Once that mission is over he is put up against Necros, a fallen angel, hell bent on causing death and destruction on Earth and refusing to come back to heaven to be judged.
Jon’s job is simple. Bring him back. No matter what.

This book is made up of a couple of different books in Jon’s life which I suspect might have been novella’s gathered together in one book. I have to admit that if I had read them separately, I might not have completed them. The first couple of books are a bit tame in a horror sense. They tell an interesting enough story but there isn’t a lot of bite to them. They trundle along without any urgency and to be honest, if it had been something on TV I probably would have switched off.

But then, Jon gets his newest mission to bring back Necros. This is where the story really takes off. Again I wouldn’t necessarily put this book in the horror category. Maybe dark fantasy. It has a Constantine feel about it but more straightforward. Not as much of the dark images or atmosphere.

Jon himself is a bit of a mixed up fella. He knew his life wasn’t exactly what you could call well spent. He was mixed up with the wrong people when he was alive and he feels that he has an opportunity to put things right but contradicts this attitude by drawing blood everywhere he goes.

On the flip side, Necros is just pure evil even though he is an angel. It is no wonder that the higher powers want him back where they can keep an eye on him.

We have epic battle scenes in this story between Jon and particularly Necros. They are fast paced and keep you glued to the pages OK but for me, they read like a lot of the Marvel stuff that we see on the go at the minute so again didn’t lean enough towards the horror side of things for me. There was too much of the bodies demolishing walls when they hit them and leaving craters in the ground when they fell type stuff. More scenes of people healing very quickly instead of arms flying off and blood and guts left lying on the ground. Like I said, more fantasy than horror.

Horror should be about scares and good verse evil on a massive scale. This was a little predictable in where it was going from early on. Even the evil characters were nice in many ways.

In saying that, Marc McGowan tells a good tale. His way of telling a story and delving into the psyche of the human mind certainly makes you think at times about our attitudes to life and how little we value it. His writing style is smooth and very easy to follow. It definitely needs a bit more meat on the bones and some more of the nasty stuff before I think it would appeal to the broader range of horror fan.

All in all, I would probably pick up more of his stuff but I would definitely like to see more grrrr in his writing.