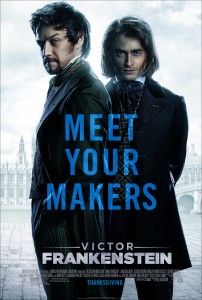 If you want to know who would win in a fight between James McAvoy and Daniel Radcliffe or what great album they bought last, then you should definitely watch the below videos. Additionally, if you’re keen to know a bit more about the upcoming Victor Frankenstein then you should probably watch them, too.

The featurettes delve in to the film and the actors discuss what it was like working with each other. As expected, they had a blast and if what they say is anything to go by, Victor Frankenstein looks like it’s going to be a lot of fun, too.

Synopsis:
James McAvoy and Daniel Radcliffe star in a dynamic and thrilling twist on a legendary tale. Radical scientist Victor Frankenstein (James McAvoy) and his equally brilliant protégé Igor Strausman (Daniel Radcliffe) share a noble vision of aiding humanity through their groundbreaking research into immortality. But Victor’s experiments go too far, and his obsession has horrifying consequences.  Only Igor can bring his friend back from the brink of madness and save him from his monstrous creation.

Victor Frankenstein comes from director Paul McGuigan (Push, Sherlock), writer Max Landis (Chronicle) and will be released in the UK on 4th December 2015.