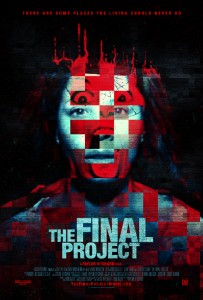 If you thought every haunted piece of land had been explored in found-footage fiction, then you were wrong. The Final Project focuses on a haunted plantation – despite the trailer mainly showing the ‘crew’ in a house – and follows a group of students as they document the supernatural goings for a school project.

You’re probably thinking you’ve heard this synopsis about 1,000 times and you’re right. From The Blair Witch Project’s humble beginnings to Grave Encounters, Paranormal Activity, The Gallows and the countless other investigative hand-held camera-dominated horror flicks, we’ve seen this all before. Haven’t we?

Synopsis:
Six students have organised the ultimate graduation project… a documentary film about one of the most notorious haunted houses in America, the Lafitte Plantation in Vacherie, Louisiana. A Civil War landmark with a dark past, complete with stories of mutilated soldiers, murdered families and restless shadows roaming its abandoned corridors… no one has entered Lafitte in years- until now. Outfitted with high-tech recording equipment in order to capture every moment of their great adventure, these intrepid young filmmakers bravely venture deep into the misty backwoods of Louisiana. But on this plantation that time has forgotten, something evil still waits and watches. When darkness falls, their deepest fears come to life, as one by one they’ll learn the horrifying truth that awaits all who dare seek the secrets of the Lafitte Plantation. The dead are awake, and there are some places the living should never go.

The trailer hits the typical clichéd beats of a found-footage flick as the group venture on to the grounds of a place they’ve been warned to stay away from. There is a slight amount of originality in the concept; the idea of delving in to America’s forgotten past with dead soldiers and murdered families could make way for some original scares. Hopefully we’ll be greeted with more than just high-pitched screaming and shakey cam, because there’s only so much more of that horror fans can take.

The Final Project has been directed by Taylor Ri’chard and will receive a limited theatrical release in the USA on 12th February 2016.