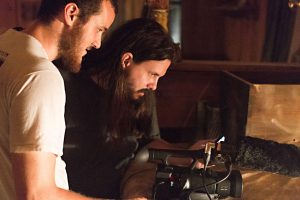 Doing for the found footage film what Scream did for the slasher, horror satire Found Footage 3D is currently gearing up for a festival run that begins with the film’s world premiere at the Bruce Campbell Horror Film Festival in Chicago on Saturday, August 20th. On Wednesday, the film’s long-awaited first trailer appeared online, and you can see it below.

SCREAM’s own Scott Weinberg co-produced the film, as well as starring as himself alongside Carter Roy, Alena von Stroheim, Chris O’Brien and Tom Saporito. Experienced sound mixer/editor Steven DeGennaro wrote and directed, making his feature debut as helmer. Among the film’s producers is one Kim Henkel, who scripted and produced Tobe Hooper’s The Texas Saw Massacre.

Here’s the official synopsis:
When he’s hired to document the behind-the-scenes action of the ultra low-budget horror movie Spectre of Death (“the first 3D found-footage horror film”), an aspiring filmmaker packs up his camera and travels with the film’s crew to a creepy cabin in the woods. But when the fictional evil presence from their film begins appearing in his behind-the-scenes footage, he has to figure out how to stop it, or it just may find its way into the real world. In the same way that Scream deconstructed the slasher sub-genre in the 1990s, FOUND FOOTAGE 3D takes a found-footage horror movie and populates it with people who are aware of all of the rules, tricks, and clichés of the genre. They know how to make a found footage movie. But do they know how to survive one? 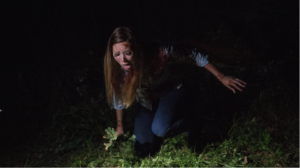 After the Bruce Campbell fest, Found Footage 3D moves on to its international premiere at London’s Frightfest on Monday 29th August.