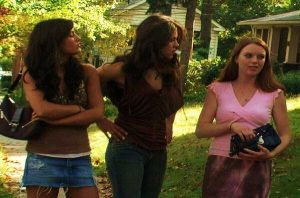 Little-seen 2010 slasher Hellweek will be belatedly released by SGL, and available to watch for free worldwide to subscribers to Amazon Prime. It was briefly available on DVD in the US back in 2010, then sank without a trace.

As announced in the press release, whose description of the film as a “classic horror slasher” may be overcooking it a little, “It can be watched for free with a subscription, and non-subscribers can rent or buy the film. SGL also has plans to re-release Hellweek as a special fullscreen edition DVD in early 2017.”

Synopsis:
Rush Week turns unexpectedly hellish when a band of sadistic masked, homicidal maniacs holed up in an abandoned warehouse wreak havoc on a bunch of not-so-innocent college kids. Wanting to ensure the new pledges prove they’re worthy, fraternity president J.J. sends them to a deserted warehouse rumored to be inhabited by demonic squatters. But the hazing takes on a sadistic tone when the tales turn out to be true. Now the pledges find themselves in a fight for their lives.

Check out the trailer for what looks like a pretty cool and enjoyably cheap slasher throwback.