Synopsis:
A young woman and a middle-aged man meet in The Forest of the Lost Souls; an area in Portugal that is popular for people who want to commit suicide. As the pair get to know each other the truth behind their reasons for visiting the forest are made clear. 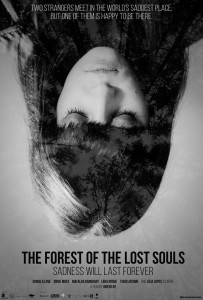 The Forest of the Lost Souls is an imperfect, but compelling feature that strives on its ominous and eerie atmosphere. Coupled with its stunning cinematography, the film is a bold and audacious feature from writer-director José Pedro Lopes. Despite not meeting the expectations of those who are keen to watch a truly psychologically challenging piece of cinema, The Forest of the Lost Souls (TFOTLS) still delivers an intense level of mystery that is indisputably powerful.

TFOTLS is an extremely brisk exploration of suicide and secrets that clocks in at a short and somewhat sweet 71 minutes. Even though it has this minute runtime, TFOTLS still manages to feel tedious and over-long. The concept would have suited a short, rather than a feature-length film, because there are plenty of moments that feel like filler scenes, rather than the important and thoughtful sequences they were probably crafted to be.

It’s a film of two parts – the first is explained above and is the core idea that the film wishes to focus on– but, the second half is where things get a bit silly. Even at only 71 minutes it would be a challenge to set the entire film in the forest and be it purely about 2 people who are keen to end their lives, but it would have been impressive to see that story play out. It was the one I was expecting. However, when the story advances from the ghostly location of the suicide forest it becomes a completely different beast, and one that does not entirely work.

The film’s shift in concern at the half-way point is disappointing, even if it is understandable. On the one side, it opens a whole new perspective on what we’ve previously seen and is actually a neatly executed surprise. However, it is impossible to see the eventual revelation as wholly successful. The overall lack of explanation is, again, understandable when considering the film’s already evasive quality, but there will be a certain amount of head-scratching and disappointment when the credits roll, I’m sure.

The film is beautiful to look at and the black-and-white photography is well-chosen to accentuate the irony in life and death’s simplicity. Never is choosing to end or continue your life an easy decision and the film’s visual style heightens this importance, by shifting attention from the colourful potential beauty in the location to the themes that reside in the core story. Nonetheless, the forest itself is captured with stunning cinematography and natural lighting, making a beautiful backdrop for the film’s more sinister moments. 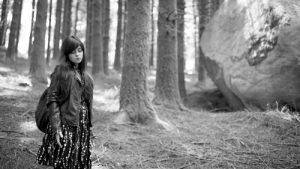 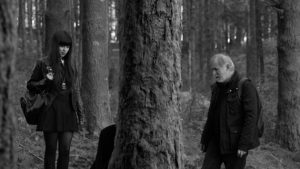 Moments of purity are where the film is at it’s strongest; the simple conversation between Ricardo (Jorge Mota) and Carolina (Daniela Love) unearth both their very different, but equally problematic psyches and pave the way for Carolina’s eventual dark descent. Daniela Love plays her with an effortless edge, shining a light on the darkness that resides in her like a cat waiting to pounce. She is a complicated soul, but one that is certainly not lost. When the audience is made aware of her real intentions, it is a disturbing moment of clarity in a film that is already shrouded by a veil of ominous undertones.

The Forest of the Lost Souls is an impressive feature that has a solid idea, even if it does not entirely work in its execution. The relentlessly slow pace becomes tedious, especially when you know the film is short enough already. However, there is a confidence in this direction that has to be appreciated and I, personally, am keen to follow the next steps of José Pedro Lopes.