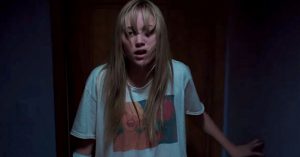 Having cemented herself as an emerging genre star after impressing in The Guest and It Follows, Maika Monroe has signed up for The Widow, the latest from Interview with The Vampire/Byzantium director Neil Jordan.

Monroe joins Chloë Grace Moretz (whose horror CV is expanding rapidly) and Oscar nominee Isabelle Huppert in the film, which was written by Jordan and Ray Wright (Case 39, 2010’s The Crazies).

Moretz plays Frances, who befriends an elderly widow after returning her lost purse. The unlikely friendship blooms but Frances soon realises that the woman has some dark secrets, and might be extremely dangerous. Monroe will play Erica, Frances’ fast-living best friend who helps her acclimatise to life in the city.

Lawrence Bender and Mark O’Conner are producing The Widow, which is currently in the pre-production stage.