FOLK HORROR INVADES WALES IN THE TRAILER FOR GWEN 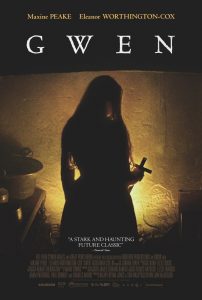 Fans of folk horror, prick up thy ears. RLJE Films and Shudder have teamed up to bring us Gwen, a dark folk tale set against the bleak backdrop of the Welsh industrial revolution, and the trailer stirs up supernatural scares.

Written and directed by William McGregor (Misfits) in his feature film debut, Gwen sees a young girl struggling to cope. Her father is absent, her mother is mysteriously ill, and if that wasn’t enough, a malevolent supernatural presence has invaded her home.

Eleanor Worthington-Cox (Maleficent) and Maxine Peake (Black Mirror) star in the film, which will arrive in theatres and on VOD and Digital HD on August 16th, 2019 before being released on Shudder. Take a peek at the trailer below.