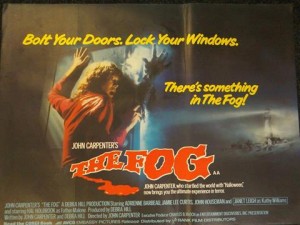 Antonio Bay is celebrating its centennial, and the whole town is excited and involved. However, the history of Antonio Bay is not as rosy as they believe, and a creeping fog coming in over the sea leads them to face some grisly truths about how their small community came to be…

For a director, following up a mega hit is always going to be a daunting task. The expectations and the pressure must be immense. No one wants to find themselves relegated to the ‘One Hit Wonder’ barrel after all. This was the position that John Carpenter found himself in 1980. His 1978 film Halloween had been a knock out success, and folk were keen to see what this new master of horror was going to come up with next to strike fear into the hearts of cinema going audiences. Instead of sticking with the slasher genre he had helped create, he chose a different tack, and directed (and co-wrote with long-time collaborator Debra Hill) The Fog – a low key, small scale chiller, full of the essence of old folk tales told around camp fires.

This is fitting, as this is how the film starts, as Mr Machan (Tom Houseman) regales a group of captivated local children with a tale of death and mysterious fog that befell the clipper ship Elizabeth Dane and her crew 100 years ago on that very night. And that story isn’t the only strange thing to be heard that night. When the clocks hit midnight, a wave of supernatural incidents sweeps the town; car alarms sound, animals act oddly and Nick Castle’s (Tom Atkins) truck windows shatter, just after he’s picked up winsome hitch-hiker Elizabeth (Jamie Lee Curtis). (This setback doesn’t stop him scoring though, in possibly the fastest courtship in film history). Despite these strange occurrences, the preparations for the towns centennial celebrations continue, led by the formidable Kathy Williams (Janet Leigh) and her long suffering assistant Sandy (Nancy Loomis). 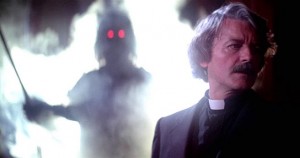 However, troubled priest Father Malone (Hal Holbrook) is in no mood for merriment, during the disturbances the previous night he found his grandfather’s journal, which details the true story of the founding of Antonio Bay; on a foggy night the founders of the town purposefully lured a ship (the aforementioned Elizabeth Dane) belonging to wealthy leper Blake to the rocks to kill him and his crew, and then stole the gold in the ship to build what is now Antonio Bay. Not ideal P.R for the place in other words. On the night of the celebrations the vengeful ghosts, enveloped in a mysterious glowing fog, descend on the town, as they begin to pick off the six descendants of the six founders of the town, while Radio DJ Stevie Wayne (Adrienne Barbeau) looks helplessly on from her station in a remote lighthouse.

The Fog is quite a patchy film in places, due mostly to re-shoots that took place after John Carpenter realised he wasn’t happy with the finished product and the studio pushed for more scenes involving gore, due to the recent rise of the slasher film, ironically partly due to John Carpenter’s (double ironically) virtually bloodless Halloween. And since The Fog isn’t even particularly gory the irony becomes threefold and it seems like an even more pointless addition. The bloodier scenes feel shoe horned in and interrupts the nice organic flow the story had. A story that, on the face of it, is well written, but if one scratches past the surface various plot holes start to appear. The casting and acting is uniformly excellent, with genre favourites all over the place, although one can’t help feeling Jamie Lee Curtis’ character was almost entirely superfluous and her casting was an attempt to cash in on the success of her and Carpenter’s previous collaboration. The short run time (a zippy 89 minutes) means that character development is at a bare minimum. Building a powerful atmosphere and delivering a fantastic score are two things John Carpenter can always be relied upon and here he delivers both in spades. His idea to shoot in anamorphic widescreen meant that the film achieved the look of a much bigger budgeted and grander affair than it was, but at the same time, with the use of traditional forbidding Carpenter ambience, the film’s setting feels small and imitate, and as the fog approaches, increasingly claustrophobic. Those hoping for another Halloween style terror fest were disappointed and the film garnered middling reviews on its initial release. It has since become a cult classic, so much so that last year an enterprising soul created a Fog action figure, which comprised purely of some cotton wool. It promptly sold out. As far as a follow up to Halloween goes, The Fog falls a little short, but for those of us who like classic ghost stories steeped in Americana, The Fog is an effective little package.